“Operators with acute visual perception are formidable weapons. They are force multipliers, and our greatest asset to insure control of ground and threats.”

When used together, controlling threats is simpler and more effective.

Not utilizing this process results in inaccurate threat assessments, and compromised situational awareness.

No one is born with trained vision. It can only be developed with experience. Consider the training required to read simple text on a high contrast background. Recognizing concealed threats, camouflaged targets, IED indicators, and distant targets in cluttered battlespace, is more problematic and requires disciplined observation. Our research shows most operators only utilize 20-50% of their vision. Visual perception provides limited acuity that must be directed and controlled. While scanning battlespace scenes, the average observer’s vision quickly fatigues and interprets a fraction of images reaching the eye. These deficiencies in perception limit intelligence collected, compromise situational awareness, and force operators to conduct observation at closer, more hazardous standoff distances. We train operators how to secure visual dominance over battlespace by collectively exploiting vision, optical systems, and environmental conditions. 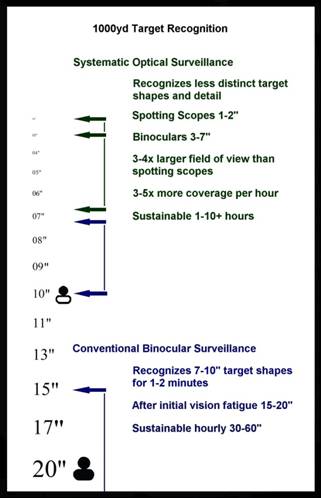 “In all cases, pre-deployment and deployment tracking and optics training played a vital, day-to-day role. Specifically, the training and equipment hoisted the Company from an inside the wire, stand-in-the-tower element to a fully functional, counterinsurgency Company that conducted full-spectrum missions ranging from raids to village engagement to Iraqi Police training. Combat Tracking and Systematic Optical Surveillance used each aspect – from the Marine’s naked eye to long-range optics and beyond (UAVs and high tech camera systems) – to deliver safety to the FOB and execute missions in a highly volatile and dangerous AO.” 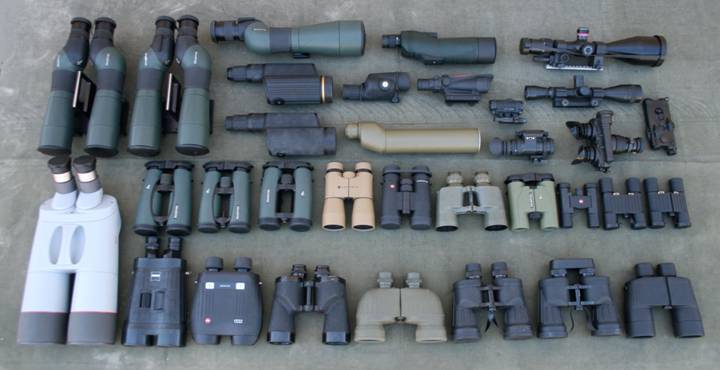 Surprisingly, today there are many myths about reconnaissance and surveillance optics that waste time and resources. We address these myths and demonstrate how to maximize any systems capabilities. Once visual perception is aligned with optical performance, detecting targets and gathering intelligence becomes easier and observation endurance increases exponentially. Operators learn how to select mission essential optics and apply techniques that double and triple standoff distances. Also, they discover that cost and weight are not always relevant to performance. Some light weight optics outperform much larger systems at similar, to half the cost. Unlike weapons systems, few agencies evaluate optics’ capabilities, and problems exist within the industry due to this lack of awareness. We’ve evaluated over 150 military, high resolution, night vision and thermal IR systems and realize many aren’t purchasing value. To address this, we recommend conducting basic tests with samples before procurement. We don’t represent any manufacturer and only recommend the highest quality systems.